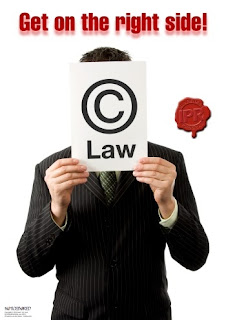 Organizations like us - practically all organizations in fact - create, own, share and exploit a vast wealth of valuable information known as intellectual property (IP).  IP generally deserves and often requires proactive protection against threats such as plagiarism and piracy , even if it is deliberately published or disclosed: IPR is more than simply a confidentiality or secrecy issue.  IPR infringements cause both direct and indirect impacts on the rightful IP owners, including loss of income, brand devaluation and competitive disadvantage.  These are serious commercial issues.

If awareness of the risks associated with disclosing IP is an important first step on the way to securing it, finding out how to bring the risks under control and enforce your IPR is step two.

IPR-related laws such as copyright, trademarks and patents are the most obvious type of IPR controls but others are covered by agreements and contracts.   Prosecution under IPR and contract laws can carry civil and criminal penalties including substantial fines, costs, and damages.  These too are serious commercial issues, with the added threat of jail time for IPR infringers bringing a sharp personal edge to the issue.
On top of all that, there are significant ethical aspects to IPR.  Piracy and plagiarism, even on a personal scale, deprives creative artists of their rightful reward for the intellectual effort involved in creating IP, and in so doing discourages them from producing more.  However, piracy and plagiarism are quite widespread in practice, implying perhaps that society does not fully support IPR.

February’s NoticeBored security awareness module contains security awareness materials on IPR for the following three audiences:
The three streams are intended to stimulate thought within, and discussion between, the three audience groups.  In this way, the awareness program extends beyond the presentations, briefings, posters and other materials supplied, taking in formal and informal communications around IPR in the business context.
Regards,
Gary (Gary@isect.com)

PS  The poster graphic thumbnailed above is available this month for free download as a read-only PDF.  If you need to customize the graphic, you'll need to contact us for the US$195 JPG version.