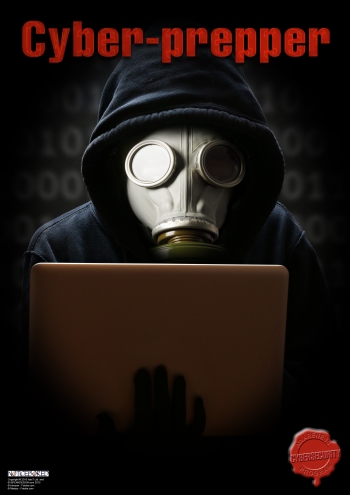 That deliberately dark, foreboding, dramatic image is just one of the awareness posters in August's brand new NoticeBored awareness module on cybersecurity. Its purpose is to catch people's eyes, intrigue them and make them think. What is a "cyber-prepper"? What are they doing? Are they friend or foe - something to be wary of, or to emulate?

The cyber-prepping concept came to me as the awareness materials were being written. While "preppers" are busy digging their underground bunkers, stockpiling water, food and small-arms to survive The Big One, the reality is that modern warfare is likely to be markedly different to the classic nuclear/biological/chemical holocaust scenarios they typically fear. Few cyberweapons make a bang or a flash, let alone a mushroom cloud - in fact, stealth is arguably their most valuable characteristic. If the enemy doesn't even know it has been infiltrated and attacked until its already too late to respond, its IT systems, comms and networks having been silently destroyed, its critical infrastructure crippled by a covert virus or electromagnetic pulses without a shot being fired, there is an obvious strategic advantage in making the first strike devastating and decisive.

At the same time, the reason preppers hoard their arsenals of guns and bullets is notionally to be able to defend their dwindling stocks against marauding mobs in the aftermath of serious battle, a terrifying situation that may equally transpire after a serious cyber-battle. Whereas being physically overrun by foreign soldiers is just a possibility, violent social disorder is highly likely in both cases as a natural consequence of the infrastructural devastation. The theory goes that we humans will revert to our primitive animal instincts, hunting ruthlessly for shelter and supplies. On a disturbingly frequent basis, TV coverage of big-city riots graphically demonstrates the threat: it's not hard to imagine that kind of thing happening on a much wider scale, especially if the emergency services have been 'neutralized' or stretched paper-thin by huge, competing demands. It won't be the gadget shops being looted so much as supermarkets and camping suppliers!

I'm still idly mulling the idea over. Aside from food, water, weapons and so on, what kinds of things should cyber-preppers stockpile? What would be the most valuable supplies, tools or whatever for survivors of a cyberwar? Ironically enough, ICT and other electronic equipment that remains operational may be at a premium in the aftermath, although it's uncertain whether it would be of much use compared to, say, garden forks and vegetable seeds.