I wrote the following in response to a simple enquiry to the ISO27k Forum concerning data centre fire suppression this morning. 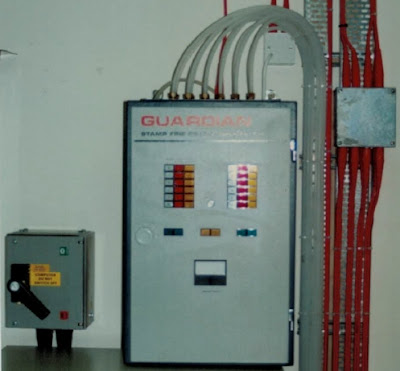 Following the Montreal Protocol agreement in the 1980’s, manufacture of the CFC extinguishant gases commonly known as “Halon” ceased before 1994. Although Halon is a highly effective extinguishant that works at relatively low concentrations (8%), has low toxicity and leaves no nasty residues, it is an extremely harmful “greenhouse gas”. In the upper atmosphere (stratosphere), CFCs are slowly (over decades) broken down by sunlight to release free chlorine or bromine which destroys ozone, subjecting the earth’s surface to increasing amounts of harmful UV radiation.

Halon made before 1994 is still being recycled from old stocks, making it increasingly rare and costly and hence limited to specific applications by organizations that can afford it, if it is not totally banned by national laws. Everything possible should be done to avoid releasing the gas unnecessarily – especially accidental triggering or inept servicing/installation/testing of suppression equipment.

Carbon dioxide, water mist or extinguishants using HFCs are normally used today for full-flood applications. HFCs are also “greenhouse gases” but are less harmful than CFCs – so they are permitted under a raft of legal constraints unless/until something better comes along. The same point about avoiding unnecessary releases applies here.

Aside from full-flood extinguishants and fire suppression, other treatments for fire risks are well worth exploring and exploiting – for instance:
Patently, there is a lot to consider here, besides full-flood extinguishants. In other words, take advice from competent professional experts. The few hints I’ve given here are nowhere near sufficient in practice, and I’m just an experienced amateur in this domain.

Most of all, don’t forget that people, especially “knowledge workers”, are extremely valuable but vulnerable information assets, hence our health and safety or welfare qualifies as an information security control as well as a legal and ethical obligation. As a simple example, ‘fire points’ (with the appropriate types of extinguishers for use by suitably-trained people) should ideally be located near designated and protected fire exits, not tucked away deep inside the room so that anyone brave/foolhardy enough to fight a small fire with a hand-held extinguisher has ready access to a clear escape route, first and foremost.

PS By the way, computer room and general building air conditioners should not be using CFCs either.