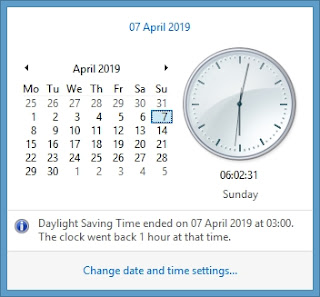 It's official - summer's over in the Southern hemisphere.

Not only did we need to light a fire to keep warm yesterday but at 3 am last night our clocks went back an hour at the end of NZ Daylight Savings Time. We're now 12 hours ahead of UTC. 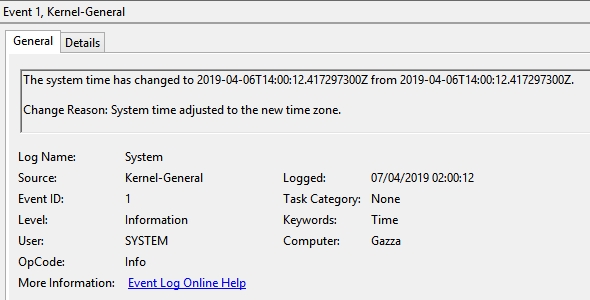 Consequently the normally sequential Windows system log appears out of sequence. According to the time stamps ► log entries at 02:55 and 02:56 were followed by the informational entry at 02:00.

That's just an reporting/display artifact though. Under the covers, the operating system uses UTC. UTC didn't change by an hour at 02:00 but just kept ticking away like normal. Log entries always join the top of the heap in a strictly sequential log.

UTC does occasionally change by a second, though, to keep it in step with the Earth's rotation which is how we animals measure time - by reference to the cycle of days and nights, sunrises and sunsets.

We all know days and nights change gradually in length throughout the year. Thanks to their atomic clocks, the scientists know that the 'gradual change' is not, in fact, entirely consistent. For reasons that escape me, atomic clocks are more consistent than the Earth's rotation, hence UTC is not entirely accurate.

UTC is only ever adjusted in whole 1 second increments ... which presents a problem for computer systems and processes that depend on UTC. Loggable events occurring within the period of a step adjustment could be logged with the wrong times, so a better approach is to speed up or slow down the clock tick rate ever so slightly until the one second change is achieved. Now, log entries will be ever so slightly wrong for the period of the change, but provided 'ever so slightly' is less than the resolution of the date-time-stamps, it shouldn't matter, hopefully.

Some systems and clocks don't adjust themselves, such as Sun.exe, a neat little Windows utility that displays a yellow or blue sun icon on the task bar depending on whether it is day or night. The times shown on its pop-up message about sunrise and sunset are wrong by an hour:

After terminating and restarting Sun.exe, the times are correct:

So it looks as if Sun.exe takes its time reference as it launches, not as it calculates and displays the pop-up message and colours the task bar icon.

Along with assorted battery-powered clocks around the place, the 1 hour error in Sun.exe is a trivial issue. For forensics purposes, accuracy of date-time-stamps to the second may be important when establishing the precise sequence of events, perhaps down to millisecond levels in some business situations (such as recording the precise moment that a bargain is struck in a volatile trading market). There might be safety or other implications as a result of strictly sequential activities getting out of sequence, unless the systems involved are coordinated to change at the same rate, which I guess is the reason for 'coordinated' in Coordinated Universal Time (i.e. UTC - the acronym is based on the French version of the phrase, as if this wasn't confusing enough already). What matters there is relative time ... and no, I'm not going into relativity at this point.

Overall, though, we manage. As with the much-feared Y2K, we scrape through. We're quite resilient, you could say. It takes me maybe a couple of days to adjust my body-clock to the 1 hour changes between winter and summer time, or other stepwise changes that occur when I fly East or West through one or more time zones. Of course I could cross just one time zone at the very point the clocks change between summer and winter time to cancel out the changes but the stress of figuring out whether I should change my watch, by how much and which way, would be worse than just coping with it. I'm glad I don't schedule flights though.

So here I sit at 0730am roughly an hour after sunrise this Sunday morning, in daylight outside. Yesterday at this clock time, I needed the desk lamp on because it was still quite dark. This evening, it will be drink o'clock an hour earlier than yesterday. Drink o'clock is more daylight- than clock-related ... so I'd better push on. Things to do while it's light.


PS  As I tagged this blog piece, I realised that the issue has numerous implications for information security. There's more to it than it seems.