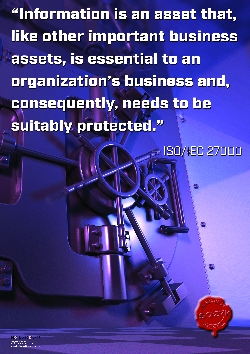 In a thread on the ISO27k Forum, Ed Hodgson said:


"There are many security controls we have already implemented that already manage risk to an acceptable level e.g. my building has a roof which helps ensure my papers don't get wet, soggy  and illegible.  But I don't tend to include the risk of papers getting damaged by rain in my risk assessment".

That question took me back to the origins of ISO27k, pre-BS7799 even. As I recall, Donn Parker originally suggested a standard laying out typical or commonplace controls providing a security baseline, a generally-applicable foundation or bedrock of basic or fundamental controls. The idea was to bypass the trivial justification for baseline controls: simply get on with implementing them, saving thinking-time and brain-power to consider the need for additional controls where the baseline controls are insufficient to mitigate the risks.  [I’m hazy on the details now: that was ~30 years ago after all.]

I have previous used and still have a soft-spot for the baseline concept … and yet it’s no easier to define a generic baseline today than it was way back then.

In deciding how to go about information risk analysis, should we:

And that, by the way, is an area where ISO/IEC27002 could really help by clarifying what are the “key” controls, which takes us full circle back to the idea of a common/universal baseline. I have in mind defining the baseline through a set of general axioms, principles or security objectives rather than what we normally call controls - things such as ‘accountability’, ‘responsibility’, ‘role’, ‘trustworthiness’, ‘reliability’ and so on.

Unfortunately, the ISO/IEC 27002 revision project is probably too engrossed with reorganizing and rewriting hundreds of controls to even consider such an idea at this point, but maybe I should suggest it for one of the other ISO27k standards - or just write it up as a suggestion.