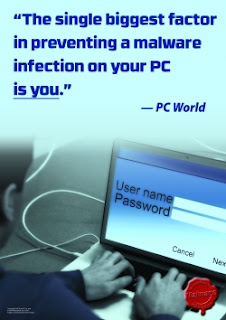 Trawling through our back catalogue for content worth recycling into next month's awareness module, I came across a quiz we set in 2017. The challenge we set the group was this:

Aside from malware (malicious software), what other kinds of “wares” are there?

The idea was to prompt the group to come up with a few obvious ones (such as software), then start digging deeper for more obscure ones. Eventually they would inevitably start to improvise, making up 'ware' terms but, if not, here are our tongue-in-cheek suggested answers, provided for the quiz master in case the group needed prompting towards more creative, lateral thinking:


There was a genuine learning objective behind all that (familiarity with the terms of art) but to be honest the main purpose was for the group to loosen-up and have a laugh ... before pressing ahead with a second, more serious challenge:

Which of those “wares” could be used to exploit our organization?  Think of realistic incidents or scenarios in which this has happened or might occur.

We provided no 'suggested answers' for the second part, hoping that the now relaxed group and quiz master would take it wherever they wanted to go, chatting on until they ran out of time or inspiration. The broad learning objective here was for the group to gain a deeper understanding of the terms and risks in this area, particularly around malware incidents that the organization had experienced: we have no idea what they might be, but hopefully those present would recount some interesting stories, real or imagined.

This informal, open-ended style of quiz or challenge is something we've developed into a routine part of the NoticeBored awareness service. Most months there are similar opportunities for the group to draw up lists of terms, incidents, risks, controls or whatever relating to the particular month's information security topic. Sometimes we've asked them to draw mind-maps, sketch out ideas or fill in the gaps on process flows: again, these are really just excuses to get the group chatting and having fun in the general area of information security, while hopefully learning things along the way. As I'm sure you appreciate, this can be a tediously dry, dull and boring topic area otherwise, so we'll grab any opportunity to lighten-up and get people smiling. Aside from anything else, it makes teaching the subject just a bit more enjoyable.

PS  Leaving aside the very silly ones, there are at least 50 legitimate 'wares'.