According to ISO/IEC 27001:2013, organisations are supposed to consider all the information security controls outlined in Annex A, confirming that they have done so by preparing a Statement of Applicability "that contains the necessary controls .... and justification for inclusions, [states] whether they are implemented or not, and [gives] the justification for exclusions of controls from Annex A".

That ineptly-worded requirement in a poorly-constructed and in fact self-contradictory clause of the standard is generally interpreted, in practice, in the form of an SoA table with a row for every Annex A control* and columns for applicability, justifications and implementation status of each control*.

Three exclusive states are generally used.  Each control* is either:
... implying a simple decision tree with just two binary questions:
Hmmmm, that's all very well in theory but here are some of the options I've heard as an auditor, or thought if not expressed as an auditee:
This week I am busy compiling a suite of generic ISMS materials to help clients jump-start their ISO27k implementations, including an SoA spreadsheet. I fear the drop-down selector list for the cells in my SoA template may be a little tedious to use but, hey, it might make our clients smile wryly.

* Joking aside, "control" is the word used in the standard for the sake of simplicity. In fact, most of the "controls" in Annex A are far from simple. Take this classic example:

There are numerous editorial, technical, philosophical and practical issues with that, too many to go into at this point but for now I'll just point out that there are several aspects to the control as stated. Not only must backup copies be taken (regularly?) but they must also be tested regularly according to a policy which has been agreed. I count not one but four actual or atomic 'controls' there (backups taken, backups tested, policy agreed, policy complied with) with several further related controls either entirely unstated or merely alluded-to, plus lots of unanswered questions e.g.
Some of these issues are addressed in ISO/IEC 27002:2013 section 12.3.1 or elsewhere, and in myriad other standards, advisories etc.  My point is that there's a lot more complexity here than implied by that binary decision tree and the three states on the SoA.

Oh and that is just one of the 100+ "controls" listed in Annex A, a relatively straightforward and supposedly well-understood one at that.

Bear this in mind when you are shown an ISO/IEC 27001 compliance certificate, or if you are given access to the associated ISMS scope and SoA - especially if the organisation's information security status matters. If you are, say, a CEO or owner, don't be fooled by the lengthy SoA and the fancy parchment that your infosec people are so proud of. Over-reliance on ineffective assurance is, itself, an information risk.

PS  Ignoring the bad grammar, perhaps SoA really means "Should of Asked" or even "Sod off Auditor"!

The Interweb drums have been beating out news of an upsurge in phishing attacks over the past month or so. I’ve certainly had more than the normal number of things along these lines lately: 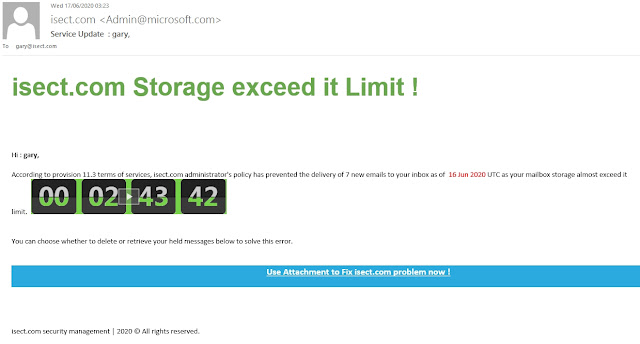 As usual, these are relatively crude and (for most reasonably alert people) easy to spot thanks to the obvious spelling and grammatical errors, often using spurious technobabble and urgency as well as the fake branding and sender email address in an attempt to trick victims. The ‘blocked emails’ and ‘storage limit’ memes are popular in my spam box right now, suggesting that these are basic phishing-as-a-service or phishing-kit products being used by idiots to lure, hook, land and gut other idiots. They are, however, using my first name in place of “Dear subscriber” or “Hello, how are you doing?” that we used to see, implying the use of mailmerge-type content customisation with databases of email addresses and other info on potential victims*.

Moving up the scale, some current phishing attempts are more sophisticated, more convincing. Sometimes it's just a lucky coincidence e.g. when the lure glints alluringly because it just happens to mention something I am currently doing - for example if I am dealing with American Express over a credit card issue, a scattergun phisher based around the Amex branding has a better than average chance of hooking me at that point. COVID-19 is an obvious lure right now, along with associated collateral and concerns such as face masks, sanitiser, death rates, lockdown, WFH and so forth (lots of potential there for the more creative phishers).

Sometimes I notice spear phishing where the phishers appear to have done a bit of research, crafting the lure, personalising it around something about me and my activities, interests, social groups etc. ... and here the problem gets really interesting.

Being a professionally-paranoid infosec geek, I wonder/worry about phishers sneaking under my radar, slipping quietly past my twitching whiskers. What am I missing? Have I been hooked already? Am I dangling on the line?

From a classical information risk perspective:
As the phishing tools and techniques grow ever more sophisticated, our controls must keep pace but, frankly, I've seen little progress over the past decade. We're still largely reliant on anti-spam, anti-virus and vigilance. There have been advances in the technologies behind email sender authentication and message integrity, no end of 'awareness campaigns' plus a few reputation- or group-based phisher detection and response approaches. Overall, though, I have the strong feeling that we're losing ground to the baddies in respect of preventive controls, placing greater emphasis on the need for incident detection, containment, response and recovery, plus resilience.

And judging by the continuing  slew of ransomware incidents in the headlines, we're failing in that department too.

It's time to review what I'm doing to protect myself, my business, family and friends against being phished. How about you? If, for instance, I had encouraged you to download a free phishing response pack or explore the realities of Business Email Compromise what are the chances you'd simply have clicked one or other of those links to take a look, without even glancing at the URLs?

* PS  The mailmerge-type technique is obvious when it fails, leading to inept phishing emails like this:


"I would like to discuss the possibility of your company with email address: %E-mail_address% partaking in government bulk supply contracts to Iraq over 2 year period."